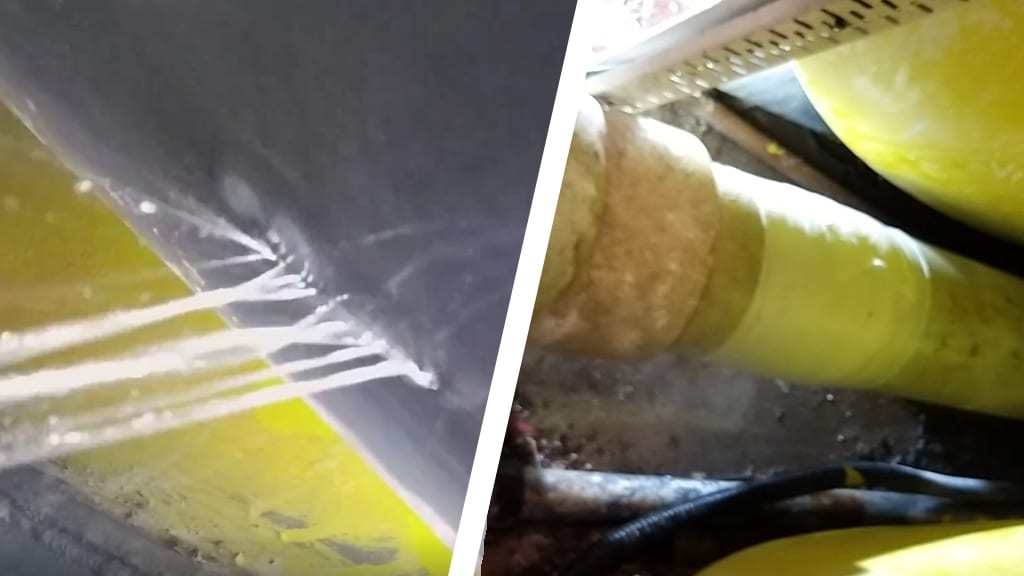 When a section of plastic PVC pipe which formed part of the swimming pool filtration system in a Welsh leisure centre developed a 50mm crack, a repair looked impossible until Sylmasta swam to the rescue.

The section of pipework in question had for many years been resting on a steel bracket. Over time, this had caused the PVC to weaken and sag, which ultimately is what led to the crack developing.

What made the leak so challenging was the location of the pipe. It was only 76mm above the ground and surrounded by other components of the swimming pool filtration system, making access for a repair extremely difficult.

Once that problem had been overcome, the next challenge as the crack itself was at the bottom of the pipe, facing towards the ground. This severely restricted the type of pipe repair that could be carried out, not to mention that if the pressure was turned off, the person carrying out the repair from above could no longer tell exactly where the crack was without the guidance of water gushing from the hole.

The maintenance company responsible for the leisure centre would normally have two repair methods for a leaking pipe in a swimming pool filtration system. The first would be to remove the damaged section and plastic weld it. If the damage was too severe, they would simply replace the pipework.

What the maintenance company needed was a product which could carry out a permanent, live leak repair within a confined space. After seeking technical assistance from Sylmasta, we were able to supply a Universal Pipe Repair Kit to fix the leaking PVC plastic pipe.

Because water pressure needed to be maintained during the repair, Wrap & Seal Pipe Burst Tape was used to seal the leak. It is normally recommended that Wrap & Seal be stretched to the maximum of 300% of its length to provide a tight seal around the leak area, where it will fuse into a solid rubber band capable of withstanding pressure up to 30bar.

With just 76mm to play with between the pipe and the ground, the maximum stretch was unachievable. Not that this mattered as the pipe repair tape was still more than capable of repairing the leak. It was then overwrapped with a SylWrap HD Pipe Repair Bandage, which set rock hard in 30 minutes for a permanent solution.

The impact resistant layer provided by the Bandage ensured that the steel bracket would cause no further damage to the PVC plastic pipe. To strengthen and protect the pipe from future wear and tear, it was decided to wrap the entire length in further bandages.

So impressed were the maintenance company with the speed and ease of the repair that they have subsequently recommended that leisure centres and swimming pool servicing companies take stock of SylWrap Pipe Repair Kits for any future emergencies.

The group technical manager said: “Leaks often occur at times when spares are challenging to obtain, such as evenings and weekends, so I suggested they consider stocking SylWrap products as a solution for fixing a leaking pipe quickly as soon as it is reported.”

These companies have since benefited from taking stock of the SylWrap Pipe Repair Contractor Case. Each case contains enough products to carry out up to six repairs at a cheaper cost-per-repair than when buying individual Universal Pipe Repair Kits. They are easy to store either on site or on the van, providing an on-hand solution for whenever emergencies arise.

Category: Case Studies
Tags: Pipe Repair Contractor Case, SylWrap HD Pipe Repair Bandage, Universal Pipe Repair Kit, Wrap & Seal Pipe Burst Tape
Cookies are used to ensure you are given the best experience on our website. By continuing to browse the site you are agreeing to our use of cookies.OkPrivacy policy