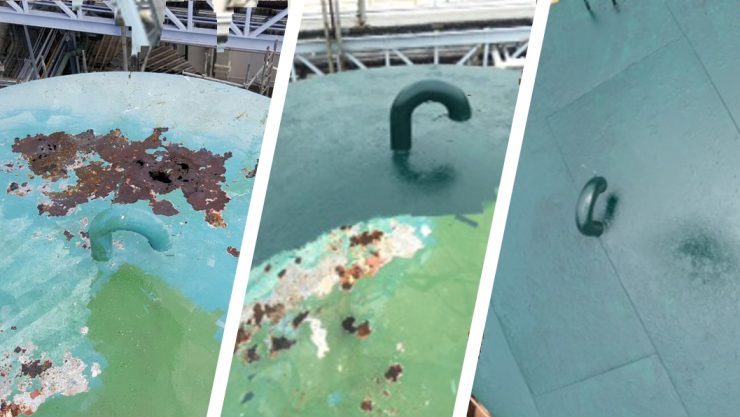 When corrosion finally breached the top of an industrial tank at a pharmaceutical plant in Puerto Rico, a repair method was needed to keep the tank operational for several more years before a planned replacement.

The tank was suffering from heavy corrosion, especially at the top. The pharmaceutical company responsible for the plant had been determined to try and keep the system operational until the scheduled replacement of the tank.

Unfortunately, the corrosion became so bad that a repair had to be made. The primary consideration was cost; the company did not want to spend thousands of dollars refurbishing a tank, only for it to be condemned within a few years.

It was decided to use Ceramic Brushable Green Epoxy Coating as a cost-effective and convenient means to both repair the damaged tank roof and protect it from further corrosion.

Ceramic Brushable Green is reinforced with silicone carbide and painted onto surfaces, structures and machinery to create an ultra-smooth, hard wearing protective layer.

It can be applied to old or new parts made from all metals and most plastics. It seals surfaces and protects against chemical attack, cavitation, erosion and pitting, as well as corrosion.

Before the application of Ceramic Brushable Green, the roof of the tank had to be cleaned to remove paint, rust and grime. During this process, several holes appeared in the tank owing to how brittle the metalwork had become.

Strips of Fibreglass Tape were cut off, soaked with E190 resin and then layered over each hole to build a composite patch repair. E190 has a work time of 30 minutes, after which the resin-soaked strips cured to form a rock-hard material sealing all holes.

Once the holes had been path repaired, the entire tank was painted with Ceramic Brushable Green. The 90 minute gel time meant that large quantities of epoxy coating could be mixed without the threat of premature curing.

Three coatings of Ceramic Brushable Green were applied. The re-coat time between layers was around four hours. A full functional cure was achieved 24 hours after the last coating, with the entire application taking a little under two days to complete.

Although only set to be a temporary repair, complications down the line meant that the planned replacement of the tank had to be suspended. Five years later and the tank was still in service, fully functional thanks to Ceramic Brushable Green with no signs of further corrosion.