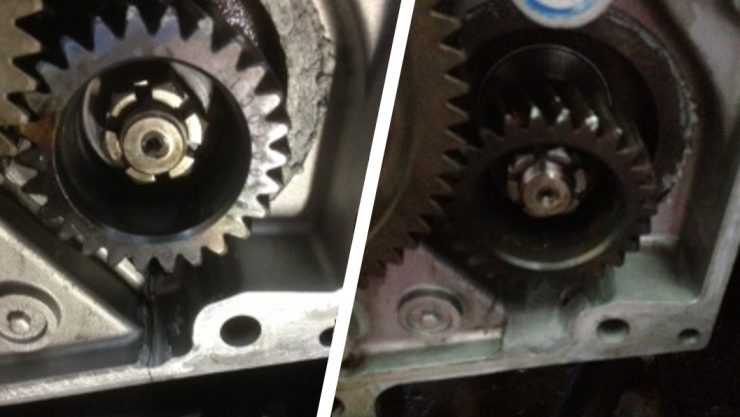 Replacing a delivery truck’s 466 International engine timing cover after it developed a hairline crack was set to cost a milk company in Puerto Rico $1000 until Sylmasta formulated a faster, more cost-effective repair method.

The delivery truck belonged to a milk company in Puerto Rico. Oil was discovered to be leaking from the timing cover of the vehicle’s 466 International engine. Once opened, a hairline crack was discovered in the casing.

A replacement cover would have cost $1000. Delivery of the part was estimated to take up to a week. The company needed the truck to be back in service as soon as possible and so they sought a faster, more cost-effective repair.

Sylmasta technicians were able to formulate a repair method for the timing cover, involving a degree of preparation followed by the use of Industrial Metal Epoxy Paste. Instructions were sent to the engineer, who had been asked to find a solution by the company.

Before the application of the paste began, Sylmasta recommended that the ends of the crack were drilled. This was to relieve stress concentration and prevent the crack from spreading further.

A coarse 3-square file was used to cut a V-shaped groove along the length of the crack, widening the gap in both the top of the metalwork and underneath. This increased the available surface area to which Industrial Metal could bond. The V-grooves were then degreased to remove contamination.

Part A and part B of Industrial Metal were mixed in the instructed ratio. A spatula was used to force the paste into the crack, completely filling both V-grooves. The paste was also overlapped by 20mm either side of the crack to ensure full adhesion.

Industrial Metal has a work time of 60 minutes, allowing it to be carefully applied to the crack without needing to worry about premature curing. A full cure was achieved in 24 hours, after which the paste set to form a solid metallic material which seamlessly filled and repaired the crack.

One day after the repair had been completed, the delivery truck was back on the road with the engine timing cover no longer leaking. The company were very pleased with the technical advice offered by Sylmasta, and the speed and ease with which they had been able to complete the application.