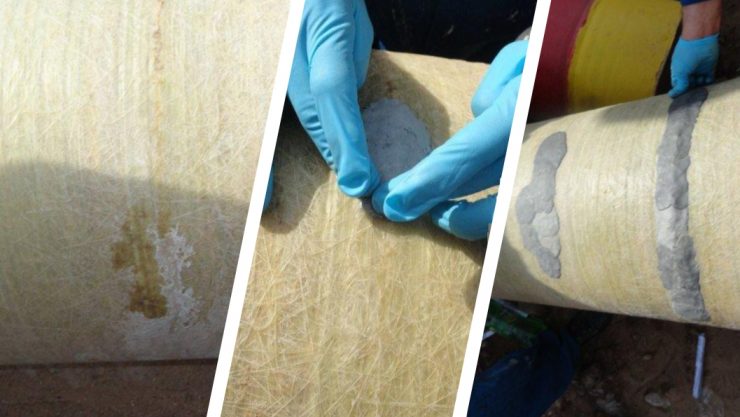 When construction work revealed a 400mm GRP pipe suffering from areas of external surface damage, an oil refinery in Saudi Arabia decided to restore the integrity of the line to lessen the chances of a future breach requiring leak repair

Ongoing construction work at the oil refinery resulted in the excavation of an underground section of 400mm GRP pipe. The external surface of the line was discovered to be damaged, with two areas suffering from heavy scoring.

Although the pipe was not yet leaking, the refinery were concerned that the weakening of the exterior would lead to a future breach of the line.

If this happened, they would then be faced with the inconvenient and costly exercise of again excavating the reburied line to fix the problem. Should any future leak prove to be too challenging repair, an even more costly pipe replacement might be required.

Keen to avoid that fate, the refinery decided to seek a method to repair the external damage whilst the pipe remained excavated and accessible. This would strengthen the line and restore its integrity.

Sylmasta supply several products for damage repair. For this particular application, Superfast Steel Epoxy Putty was deemed the best solution due to the relatively small areas requiring repair, and the speed and ease with which it can be worked.

Superfast Steel comes in pre-formatted 114g stick. Multiple sticks were used for the repair. Chunks of putty were cut from the stick and kneaded by hand. Once the putty had turned to a uniform colour and whilst remaining soft, it was pushed down onto the pipe and smoothed over the scored areas.

Within 10 minutes of mixing beginning, the putty began to harden. Once fully cured, it permanently imbedded into imperfections in the line. In effect, the putty created a new waterproof layer hard as steel over the weakened parts of the GRP pipe. The entire repair took less than two hours to complete.

Had the area of damage been larger and deeper, then Industrial Metal Epoxy Paste would have been recommended. Industrial Metal is trowel applied and with a longer work time, allowing more to be mixed and spread over significant sections of weakened pipes requiring rebuild.

The GRP line could have been further reinforced using a SylWrap HD Pipe Repair Bandage. However, the trench dug as part of the construction work was not deep enough to effectively wrap a bandage around the bottom of the pipe.

Not wanting to excavate further down, the refinery decided to rely on Superfast Steel to strengthen the line. Several years later and the underground line had still not been breached. Superfast Steel had done its job.