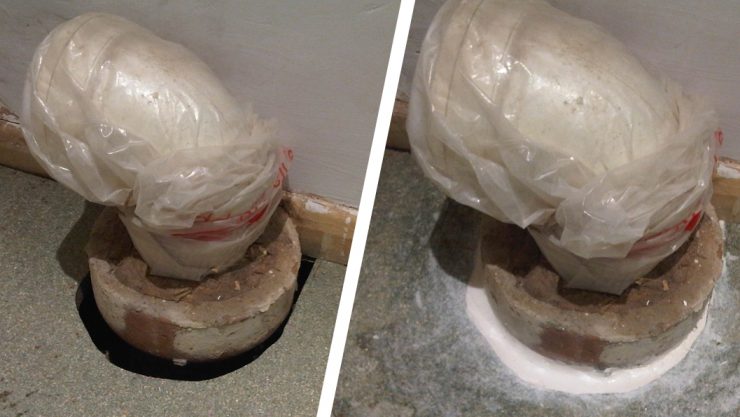 A hole cut into a bathroom floor during renovation work was made too big for the toilet waste pipe it was to house, meaning a waterproof repair material was needed to permanently fill the cracked area between the pipe and the floor.

Sylmasta AB Original Epoxy Putty
Waterproof, hard-wearing epoxy putty with a longer work time used to permanently fill all gaps between the pipe and the floor

Renovations at a property in the United Kingdom involved the toilet being moved to a new location within an improved bathroom. To prepare for the move, the contractors carrying out the work cut a hole out of the floor where the toilet waste pipe was to connect with the sewer pipe.

When the toilet waste pipe was fitted in place, it was discovered that the hole which had been cut was too big. This left gapping all the way around between the base of the pipe and the floor. At its largest, the gapping extended to 50mm wide.

The contractors wanted a straightforward method to fill the cracks so that the plumbing in of the toilet waste pipe could be completed. Sylmasta recommended the use of Sylmasta AB Original Epoxy Putty.

AB Original is a ceramic-filled, general purpose, waterproof epoxy putty which is the hardest wearing available. It comes with a two-hour work time for use in larger and more complex repairs.

It was calculated that around 1kg of AB Original would be needed to repair the toilet waste pipe. This was delivered to the property, where the resin and the hardener were mixed in equal measures and kneaded by hand.

Once the putty had turned an off-white colour to indicate successful mixing, it was pushed into the gapping between the waste pipe and the floor whilst it remained soft enough to shape and manipulate.

The longer cure time of Sylmasta AB meant that more of the putty could be mixed in one go without the threat of premature curing. As the putty was applied, it was smoothed off with a little water and a filling knife and then left to harden.

A full cure was achieved in 24 hours, leaving the cracked area between the toilet waste pipe and the floor permanently filled with a waterproof repair material sharing similar properties to the floor. The renovation of the bathroom was able to continue with virtually no disruption to timeframe.

When it came to the installation of a new bathroom floor surface further along the renovation process, AB Original would withstand being tapped, drilled, screwed, sawed, ground, filed, painted and any other treatment needed to complete the improvements.