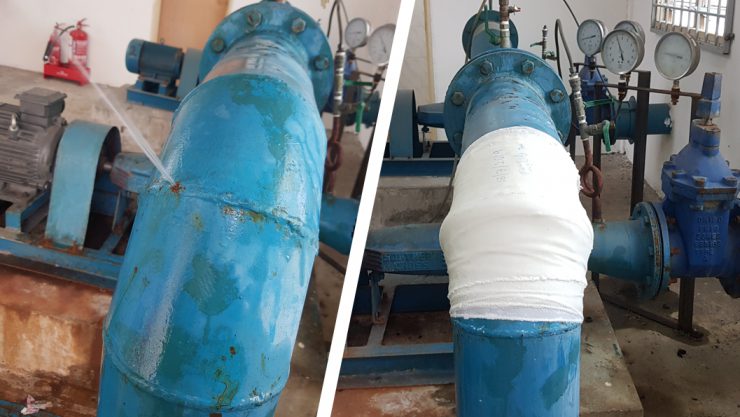 When a 150mm steel pipe elbow in a Malaysia pumping house developed a pinhole through which water was leaking out at 6 bar pressure, the company responsible for the facility turned to Sylmasta for a rapid live leak repair.

The steel pipe was an important part of the system at the pumping house, operated by a water company. A pinhole leak had appeared on an elbow joint weakened by corrosion where two sections of metalwork joined together.

Because the leak was on an elbow, a repair clamp could not be fitted. The pipe could not be taken out of operation for repair or replacement due to its importance to operations at the pumping house.

The water company’s maintenance team therefore used a SylWrap Universal Pipe Repair Kit to carry out a live leak repair which would be effective on the 150mm elbow operating under 6 bar pressure.

Wrap & Seal Pipe Burst Tape was used to seal the pinhole leak in the pipe. Wrap & Seal is made from self-amalgamating silicone. It stretches by 300 percent and fuses to form a solid rubber band over holes and cracks in pipework.

Once the Tape had successfully sealed the hole in the pipe, it was overwrapped with a SylWrap HD Pipe Repair Bandage. SylWrap HD is a composite wrap with a water activated resin which sets rock hard in minutes.

The Bandage was wrapped around the elbow and smoothed down whilst water from a bucket was poured over it at sporadic intervals. Once cured, SylWrap HD provided an impact resistant shell around the elbow, preventing it from any future leaks or bursts.

Within 30 minutes of the start of the application, the leaking elbow had undergone successful repair by the maintenance team with no interruption to operations at the pumping house.

Both Wrap & Seal and SylWrap HD are WRAS approved, meaning that they are certified as safe to use on pipes and fittings carrying drinking water according to British Standards.

Numerous other successful pipe repair applications have since been made in Malaysia using Wrap & Seal and SylWrap HD supplied in a SylWrap Pipe Repair Contractor Case.

This has led the Case to be approved by the national supplier in Malaysia for carrying out leak repairs across Kuala Lumpur’s vast pipe network.

Each Contractor Case contains enough products to make up to six live leak repairs on pipes of all diameters and types without the need for any training.

The Case can be easily stored on-the-van, providing a lightweight and more versatile alternative to carrying around heavy, bulky pipe repair clamps.

When leaks and bursts on the water network are identified, a contractor simply has to reach for the Case on their van to repair the problem in under 30 minutes.