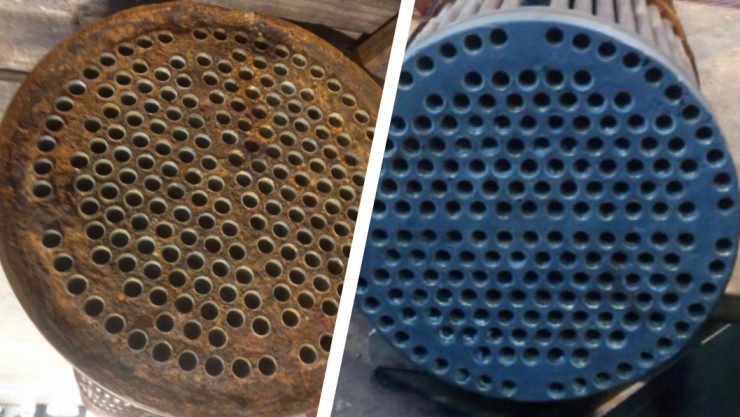 Replacing a turbine cooler condenser unit because of a heavily corroded, deformed cast iron face was not a cost-effective solution for a power plant in Puerto Rico, so they instead turned to Sylmasta to find a method to repair and rebuild the part.

The condenser was part of the turbine cooler at the electrical power plant operated by the Puerto Rico Power Authority. It was used to condense steam back into water and had been in operation for approximately 20 years.

There were two components of the condenser. The tubes were made from bronze and the face was made from cast iron. Having been exposed to steam and water for over two decades, the cast iron face had become heavily corroded and deformed.

Replacing the condenser would have been an extremely costly exercise compared to the value of the turbine cooler as a whole, which itself would need replacing within the next 5 to 10 years.

Parts were no longer made for this particular type of condenser because of its age, and so a replacement face would have had to be specially fabricated and then shipped to Puerto Rico.

Rather than install an expensive new condenser with a lifespan of 20 years for a turbine that would have to be condemned long before that, the Power Authority instead sought a way of keeping the condenser in operation until such time as the whole turbine needed replacing.

Sylmasta recommended the use of Ceramic Supergrade Abrasion Resistant Epoxy Paste for the repair and refurbishment of the condenser, to rebuild the deformed face and offer protection from future corrosion and wear.

Ceramic Supergrade is filled with silicone carbide for ultimate surface hardness and an extremely smooth finish. It is applied to worn or damaged surfaces to rebuild, or to new equipment to protect parts from abrasion, corrosion and chemical attack.

Before the application began, the condenser was cleaned as best it could be, with traces of rust and grime removed. Rods were inserted into every tube hole in the face, covering them so that they did not become inadvertently filled with epoxy paste.

Ceramic Supergrade was then applied to the face around these rods. The epoxy paste filled in imperfections in the cast iron as it was built up to create a new, waterproof, surface on top of the original deformed face with high resistance to abrasion and corrosion.

The 60 minute work time of Ceramic Supergrade allowed large quantities of the paste to be mixed and applied carefully without the threat of premature curing.

A full cure was achieved in 24 hours, after which the condenser could be returned to the turbine and the system put back into operation following a successful epoxy paste rebuild . The high-wear resistance of Ceramic Supergrade would keep the condenser in service for many more years.