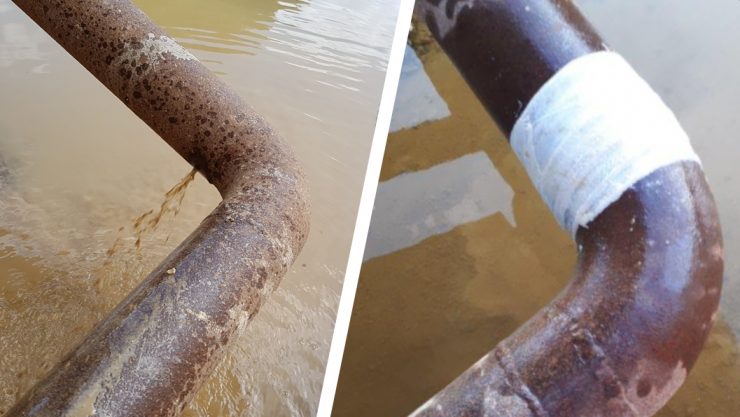 When a quarry in the UK was unable to repair a leaking 150mm steel pipe in their wash plant using a clamp due to the pinhole being located on a 90 degree elbow bend, they instead turned to Sylmasta for an alternative, versatile solution.

The 150mm steel pipe was located in the wash plant of the quarry, passing across a lake. Wear and tear had caused a pinhole leak to appear in the line around 50mm away from a 90 degree elbow bend, leading foul water to escape into the lake below.

Normally when pipework failed on site, the quarry would fit a pipe repair clamp over the problem area. This was not possible in this case because of the location of the leak area being so close to the elbow.

Seeking a more versatile repair method capable of being effective on the bend, the quarry contacted Sylmasta. Once it was established that pressure could be easily shut off, a SylWrap Standard Pipe Repair Kit was delivered to the site.

The pipe was cleaned as best it could be before the repair began. Superfast Steel Epoxy Putty Stick was used to seal the pinhole. The required amount of putty was cut from the stick and kneaded by hand.

After around two minutes of mixing and whilst still soft, the putty was pushed into the hole in the pipe. Within 10 minutes it had hardened, forming a material as hard as steel which now filled the pinhole.

To further reinforce the repair, a SylWrap HD Pipe Repair Bandage was applied around the leaking section. SylWrap HD is a composite repair wrap with a water activated resin which sets rock hard in minutes.

SylWrap was wrapped and smoothed around the pipe, curing to form an impact resistant sleeve. This would help protect the pipe from future breakages, a common occurrence due to the abrasive nature of operations at the quarry.

The entire application was completed in under 30 minutes by a member of the operations team at the quarry. No training was required; they simply followed the instructions provided with the Kit to make a permanent pipe elbow bend repair.

Since the repair, the quarry group have taken further stock of SylWrap Pipe Kits, knowing them to be capable of making more versatile repairs than heavy, bulky pipe repair clamps.