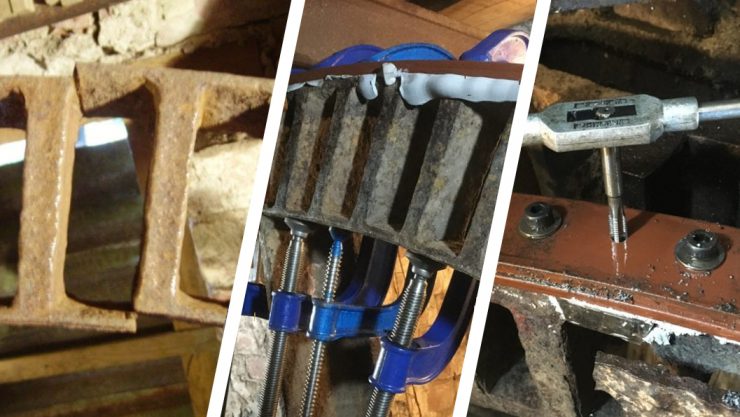 When the repair and refurbishment of a 19th century pit wheel required a waterproof, corrosion resistant material to protect the cast iron wheel from water and help bond two protective steel hoops for reinforcement, Sylmasta had the ideal solution.

The Mill ceased grinding flour in 1935. Over 80 years later and the Mill’s latest owner was undertaking a long-term refurbishment project to make it turnable again. One of the most challenging aspects of this was the repair of the pit wheel.

Corrosion and the passage of time had weakened the castings of the wheel. Both the inner and outer castings had been unusually thin for a pit wheel when they were originally installed in the 1800s, and two generations of previous repair attempts had been unable to suitably reinforce them.

The wheel was cracked and broken in various places. Calculations indicated sudden impacts such as a cog breaking would cause the casting to break apart again – possibly irreparably.

Replacement was not a viable option because the cost of doing so exceeded the budget of the project. The only way to get Mordiford Mill operating again was by finding a repair and refurbishment method for the pit wheel.

It was decided to strap both the inside and the outside of the wheel with steel hoops to encompass the 19th century ironwork. This would reinforce the pit wheel, ensuring it had adequate protection from future impacts.

These steel hoops could not be welded to the pit wheel because of the dangers associated with welding old cast iron, which tends to explode due to air pockets within the iron. No welder would guarantee a result as success of such a process is less than 50 percent.

Welding would also have left gaps between the steel hoops and the uneven, damaged casting of the wheel. Water entering these gaps would potentially collect inside them, leading to further corrosion of the original cast iron.

As a water-resistant material capable of high-strength bonding, Sylmasta AB Original Epoxy Putty provided the ideal solution for encompassing the cast iron to prevent water ingress at the same time as aiding the adhesion of the steel hoops to the wheel.

Prior to the application of Sylmasta AB, the casting was cleaned with a needle gun and a wire brush on an angle grinder. This removed rust, grime and dirt from the surface.

The long work time of Sylmasta AB meant that large quantities could be mixed in one go without the worry of premature curing. The putty was applied to the outside casting of the wheel first, after which large sections of the steel hoop were fitted over the putty and held in place using clamps.

The steel hoop was then screwed in place and the clamps removed. The entire process was repeated to the inside casting, although this was slightly more challenge because of the spokes of the pit wheel connecting with the casting.

To overcome this, the application was broken down into smaller sections between each spoke. Sylmasta AB was applied and a small section of steel hoop added, clamped and screwed, before moving onto the next section on the inner wheel.

Once completed, the original pit wheel was successfully reinforced with a steel casing that would last for many years and the presence of Sylmasta AB meant that no corrosion caused by trapped water could attack the ironwork.