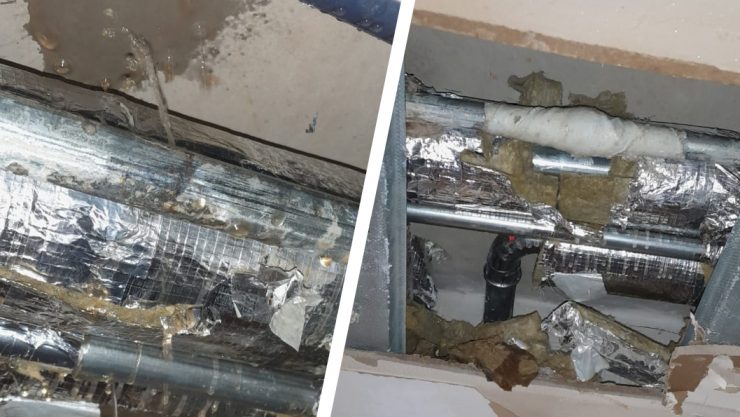 The district heating system was operated by a United Kingdom based company who specialise in installing and maintaining sustainable energy generation systems in public buildings, residential developments, factories and manufacturing sites.

Because of the importance of pipes to these systems, Sylmasta already had an established relationship with the company prior to the repair. Each of the company’s vans are equipped with a SylWrap Pipe Repair Contractor Case in case of emergencies, enabling contractors to make up to four live leak repairs as soon as problems are identified.

The repair in question was to a large pinhole leak in a section of 50mm pipe suspended in the ceiling of the building. Pressurised water was jetting out in numerous directions, causing substantial damage to surfaces and surrounding pipework both above and below the leaking pipe.

Flow could not be turned off, as this would have involved shutting down heating across the entire building. A live leak repair to the district heating system was therefore necessary, using lightweight materials which could be easily carried and applied from the top of a ladder used to reach the ceiling.

From the Contractor Case, Wrap & Seal Pipe Burst Tape was used to successfully seal the leak. Despite the difficulty in accessing the pipe caused by the minimal space to work in the ceiling cavity and the surrounding pipes, Wrap & Seal was still stretched by 300 percent, amalgamating to form a solid silicone band over the steel pipe.

The entire section was then encapsulated with a SylWrap HD Pipe Repair Bandage. SylWrap HD is a composite wrap with a water activated resin which sets rock hard in minutes. Once cured, it reinforced the pipe from any future breakages.

After seeing the extent of the damage that escaping water managed to cause in the short space of time between the leak being identified and the Contractor Case arriving on site, the company were appreciative of their partnership with Sylmasta.

Had a Contractor Case not been so readily available, then this could easily have turned into a major incident for the district heating system and the building. Instead, the company’s reputation was enhanced for the swift manner in which they reacted to and repaired the problem.

The company have since used their Contractor Cases to make live leak repairs to pipes in various systems they operate made from aquatherm, a semi-rigid polypropylene material.

Aquatherm pipe is popular because it does not react with water, preventing leaching, corrosion, scaling and erosion – major causes of water contamination and long-term pipeline failure.

Once thought to be foolproof, it is now known that failures can happen in aquatherm. Reasons for this include excessive clamping, elevated temperatures, extreme vibrations, flow velocity, water pressure and chemistry, or the presence of copper ions.

There is also the danger posed when a section of aquatherm pipeline has been repaired by inserting copper or iron pipe, leading to different coefficients of thermal expansion and severe cracks.

In the event of any failures in aquatherm piping, the presence of Contractor Cases across the company’s fleet of vehicles means that leaks and bursts can be attended to instantly, instead of suffering delays waiting for materials or parts to be delivered.